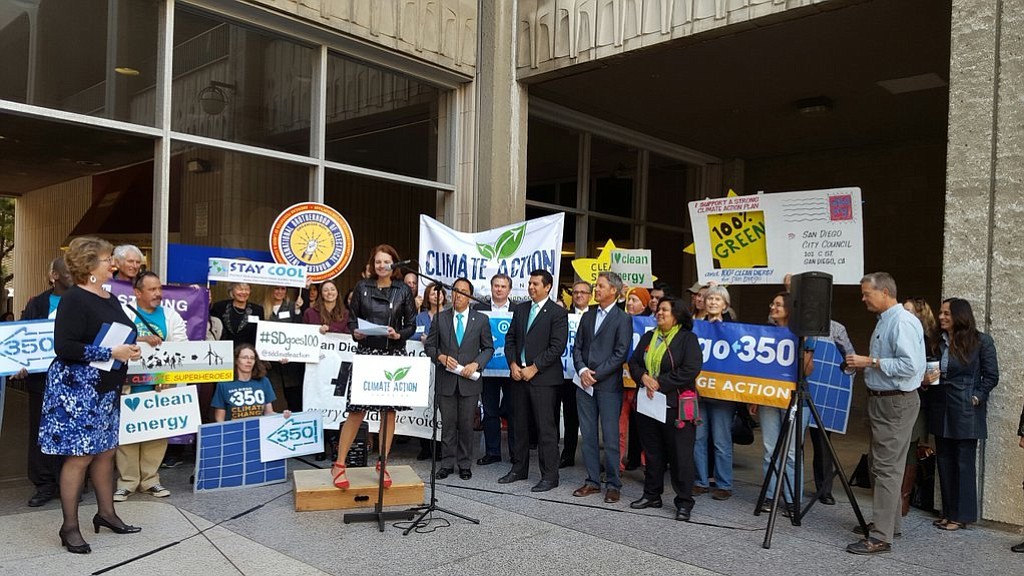 Last month, San Diego’s City Council unanimously approved a Climate Action Plan (CAP) with the ambitious goal of switching to 100% renewable energy and cutting greenhouse gas emissions (GHG) in half by 2035. The CAP has been under development for five years, with its final version released in September 2014 by Mayor Kevin Faulconer. The CAP includes five main strategies for reducing GHG to achieve 2020 and 2035 targets:

A breakdown of GHG emissions in San Diego shows that transportation contributes 55% of community-wide emissions, mostly due to the high frequency of single-occupancy vehicle trips. Accordingly, the CAP calls for cutting the proportion of San Diegans who commute by car from 87% to 50% by 2035, with a specific focus on residents who live within a half mile of existing or planned transit stops. The population of those living in these “Transit Priority Areas” is expected to be about 60% of San Diego residents by 2035. To achieve this goal, the plan calls for shifting commute choices away from the personal car and toward transit, bicycling, and walking. The plan calls for an increase in transit usage from 10% to 25%, bicycling from 1% to 18%, and pedestrian travel from 1% to 7% by 2035.

The Bicycling, Walking, Transit & Land Use strategy of the CAP includes actions to improve mobility, enhance vehicle fuel efficiency, and reduce overall vehicle miles travelled (VMT) of personal cars. The CAP states that by changing land uses and adopting a new community design perspective, San Diego residents will be able to decrease their travel distance and rely more on alternative forms of transportation. Other implementation methods include revising and managing parking standards, retiming traffic signals, and installing roundabouts in congested intersections. Additionally, one of the Clean and Renewable Energy goals includes increasing the number of municipal zero emissions vehicles. The target is to increase the number of municipal fleet ZEVs to 50% by 2020 and 90% by 2035.

A full list of the Bicycling, Walking, Transit & Land Use strategy’s goals, actions, and targets are outlined below.