In addition to considering the air quality benefits of zero emission vehicle (ZEV) adoption, as discussed in a recent post, the San Diego Association of Governments (SANDAG) has extensively considered means to reduce greenhouse gas emissions from transportation countywide. The state-administered Advanced Clean Car Program and Low Carbon Fuel Standard (LCFS), and the San Diego region’s Sustainable Communities Strategies and regional transportation demand and system management strategies (TDM and TSM) will be the main means to reduce greenhouse gas (GHG) emissions from the transportation sector. According to SANDAG, these measures could reduce GHG emissions from cars and light duty trucks from 35,000 tons/day in 2012 to 17,000 tons/day in 2035 (San Diego Forward: The Regional Plan, Appendix D). However, to continue progress toward the California goal of 80% GHG emissions reductions by 2050, SANDAG has assessed the GHG reduction impact of various additional avenues. 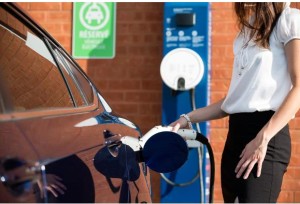 In San Diego Forward: The Regional Plan, SANDAG considered several transportation policy scenarios that could help reach an 80% reduction in regional GHG emissions by 2050. These are informed by both California Air Resources Board and Caltrans statewide transportation GHG emissions reductions scenarios, outlined in the ARB Draft Vision for Clean Air and the Caltrans Draft California Transportation Plan 2040. While the more ambitious scenarios SANDAG considers that achieve an 80% reduction require new state and federal policies, the less ambitious scenarios are centrally composed of transportation policies outlined in San Diego Forward: The Regional Plan. SANDAG’s first scenario is a baseline, projecting the impact of California policies already in place, plus proposed TDM and TSM strategies. Policies factored into the baseline scenario include the Advanced Clean Car Program, the California Renewables Portfolio Standard, and the LCFS. TDM and TSM strategies include freeway and roadway management, advanced transportation and vehicle technology, transportation hubs, bike parking, vanpooling and carpooling, and expanded electric vehicle charging, among other programs (Appendix D). All of these are incorporated in the Regional Plan. The first scenario also assumes additional TDM and TSM strategies beyond 2035 continue to decrease emissions. These would produce a statewide GHG reduction of over 50% from 2012 by 2035 (Figure D.1). Scenario 2 is more ambitious, and falls just shy of meeting the California goal of an 80% GHG emission reduction by 2050. It follows the assumptions of Scenario 1 to 2035, then includes a phase-in of alternative fuel vehicles and ZEVs, as well as other measures to decrease vehicle miles traveled (VMT) (Figure D.1). Several transportation programs in the Regional Plan would accomplish a significant reduction in VMT. SANDAG also notes Scenario 2 would require significant state and federal policy changes in addition to aggressive regional measures (Appendix D). The third and fourth scenarios would require even more ambitious adoption of alternative fuel vehicles and ZEVs, accompanied by VMT reduction measures (Appendix D). SANDAG shows that these would be necessary for the region to reduce GHG emissions from the transportation sector by 80% by 2050 (Figure D.1). Thus, to meet state emissions goals, regional ZEV incentives would be particularly useful. 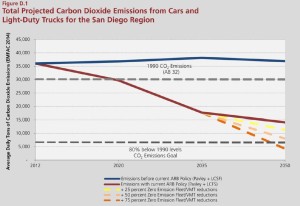 The next post will further explore ZEV incentive programs and how they have contributed to GHG reductions in other regions. In particular, I’ll discuss incentives offered by the BAAQMD and SJVAPCD, as well as the state of California. How have their programs been implemented? What achievements have they produced of do they expect to produce? Then, in the next post, I’ll consider implications for vehicle incentives on San Diego County’s own GHG goals.