This past Saturday, San Diego celebrated National Plug-In Day 2013 at Liberty Station. It was a beautiful day in Point Loma for electric vehicle owners and interested individuals alike to gather and marvel at new upcoming electric vehicle technology and test-drive new car models.

To the left side of the fair, companies such as Nissan and Chevy were present to showcase their electric vehicle models (Nissan Leaf and Chevy Volt) and provide free test drives to  participants. 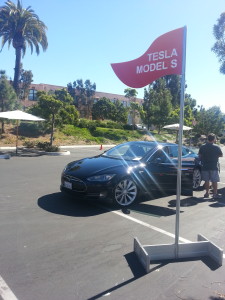 Tesla Model S ready to load  passengers for a test-drive. 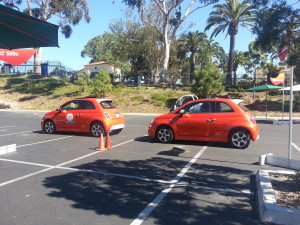 The most popular models by far were the ride-along drives in the Tesla Model  S and the  BMW i3. Participants were not allowed to drive the cars themselves, but were given a through tour of the electric vehicle technology inside the vehicle during the drive.

Other notable cars available for a quick test-drive around the neighborhood were the Fiat 500e, Toyota Plug-In Prius, Ford Focus EV, Chevy Volt, VIA Motors Extended Cab Pick-Up Truck, and a host of other electric vehicles.

Nicole Apperson of CCSE ready to talk to customers about the Clean Vehicle Rebate Program.

To the right side of the fair, booths various companies featured displays of  new  sustainable electric vehicle technology. The California Center for Sustainable Energy (CCSE) was present to educate potential customers on the Clean Vehicle Rebate Program. 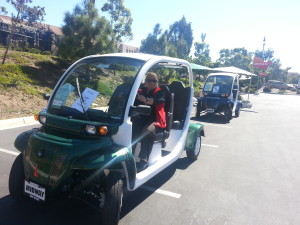 The GEM Recreational Vehicle can reach up to 25 mph