The San Diego County Air Pollution Control District (SDCAPCD) participates in a number of statewide vehicle incentive programs. Although they don’t target ZEVs, these incentives can facilitate their adoption for trucks and heavy duty vehicles. The Carl Moyer Memorial Air Quality Standards Attainment Program, in its 17th year, provides up to $3 million annually for the replacement of heavy-duty diesel engines with lower emitting vehicles. The On-Road Heavy-Duty Voucher Incentive Program helps to replace qualifying trucks with lower-emission vehicles, or to install Verified Diesel Emission Control Strategies. It offers $5,000 to $45,000 for trucks with an engine model year 2006 or older. Both programs are run by the San Diego Air Pollution Control District (SDAPCD). About half of San Diego County’s transportation greenhouse gas emissions are from medium- and heavy-duty vehicles, so the current incentives are successful in targeting substantial GHG emitters. However, as discussed previously, air districts have adopted a range of ZEV incentives to complement state and federal policies to spur light-duty ZEV adoption. At present, the SDAPCD offers few vouchers or tax credits for light-duty ZEVs. It did recently offer incentives to upgrade older airport taxis to hybrid electric and alternative fuel vehicles. However, the San Diego region could greatly benefit from an incentive program for light-duty passenger vehicles.

San Diego County is a national leader in electric vehicle adoption, but its regional plan highlights a need to continue to increase adoption at an ambitious level to meet statewide GHG emission reduction targets. If the state intends to have 1.5 million ZEVs on the road by 2025, San Diego County’s share would be 141,000 vehicles. With 17,000 vehicles presently –including about twice the number of BEVs as PHEVs, 400 car2go car-share ZEVs, and a small number of other alternative fuel vehicles –that is an increase of 124,000 ZEVs. According to estimated statewide ZEV sales, the San Diego region population of PEVs is expected to increase to 50,000 in 2020; 300,000 in 2035; and nearly 400,000 in 2050 (SANDAG). As the San Diego Regional PEV Readiness Plan notes, “mandates and incentives will prove to be essential to encourage PEV growth” and “in order to foster the market’s rapid growth, a robust EVSE [electric vehicle supply equipment] network needs to be built.” The region presently has 908 public charging stations at 330 locations and 60 DC fast chargers at 34 locations (SDG&E, 2015). Between April 2011 and May 2013, 114 business and fleet stations at 39 sites were installed (Appendix U.12: PEV Readiness Plan). This is an appreciable growth, and should hope to be an ongoing trend. 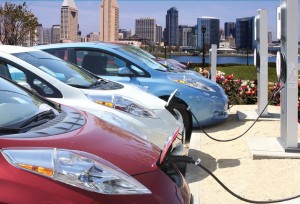 Fortunately, SANDAG is planning to increase EVSE infrastructure as part of its Transportation System and Demand Management Programs. In 2020, it will implement Transit Infrastructure Electrification and Regional Charger Programs. Through 2050, it has allocated $10 million to infrastructure electrification of bus fleets, installing wireless recharging at transit stations (San Diego Forward: The Regional Plan, Appendix E). It has allocated $30 million to expand the network of Level 1 and 2 charging stations through regional planning and installation incentives. Three-quarters of stations will be Level 1, with an installation incentive of $250, and one-quarter will be Level 2, with an installation incentive of $2,100 (similar to Metropolitan Transportation Commission incentive levels). The program should result in 36,000 charging stations by 2035 and 43,000 by 2050 (Appendix E). Following estimates of the Electric Power Research Institute, SANDAG assumes that one charging station would support five PHEVs, and increase electric miles traveled of PHEVs from 30% to 41% (Appendix E). The additional electric miles of PHEVs should allow for a net reduction of carbon dioxide emissions of 390,000lbs by 2035 and 455,000lbs by 2050 (SANDAG, 2015).

In compliance with SB 375, SANDAG has developed its second Sustainable Communities Strategy. Prepared as part of San Diego Forward: The Regional Plan, it expects an 18% per capita reduction in greenhouse gas emissions from passenger vehicles by 2020 and a 24% reduction by 2035 from a 2005 baseline (Appendix C). This significantly surpasses the California Air Resources Board’s targets for the San Diego region of 7% by 2020 and 13% by 2035.

The Value of Tailored ZEV Incentives for San Diego County

One of the first incentives the San Diego region could consider adding to its ZEV portfolio is a purchase program for light-duty vehicles to complement those currently in place for medium- and heavy-duty vehicles. Both the BAAQMD and the SJVAPCD have light-duty vehicle purchase incentives that can be stacked onto state and federal incentives. This would offer additional motivation that may be necessary for a customer’s first ZEV purchase. The region could also consider funding design. The California incentive program has recently been modified to include an income cap and progressive funding based on income to stimulate greater ZEV purchasing among lower income groups. San Diego may wish to mirror this design to spread ZEV adoption across income groups. Lastly, funding should vary based on vehicle type—BEV, PHEV, NEV or motorcycle—as these offer different air quality benefits.

Multi-unit dwellings (MUDs) are a particularly important charging site to spur ZEV adoption. The EV Project found that almost three-quarters of PEV charging occurs at a vehicle owner’s residence, and 19% occurs at public charging stations (Appendix U.12). Due to new California housing laws that call for increasing the mix of housing types and increasing infill development, there will be a significant increase in multifamily housing in both 2020 and 2050 (San Diego Forward: The Regional Plan, Appendix L). In fact, 84% of future residential growth will be multifamily housing through 2050 (Appendix L). In addition, the National Household Travel Survey indicates that Level 1 charging stations can satisfy plug-in hybrid electric vehicle (PHEV) drivers, but for battery electric vehicle (BEV) drivers, Level 2 charging is “critical.” Level 2 charging stations presently may not be accessible to those living in multi-unit dwellings (MUDs), partly because many MUD owners have little financial interest in installing stations. Greater incentives for MUD owners are especially necessary to increase resident’s charging opportunities and willingness to purchase a PEV.

An initial step to spurring ZEV adoption at MUDs has been the voluntary CALGreen Code of the California Building Standards. The 2012 Supplement called for “at least 3% of the total parking spaces, but not less than 1%, in low-rise multi-family dwellings be prepared to support electric vehicle charging infrastructure (EVSE) in the future” (Appendix U.12). The proposed 2015 update would require that at least 4% of spaces be prepared to support EVSE. These are important steps to encourage the growth of electric vehicle charging at MUDs, but financial incentives would likely have a greater impact.

Increasing incentives for residents living in low-income housing will also be important for the San Diego region. Over a quarter of Traffic Analysis Zones– a geographic unit used throughout the San Diego regional plan that is about the size of a census block– presently count at least 41% of the population below the regional poverty level (Appendix H, Figure H.6). From 2010 to 2020, abiding by state laws such as SB 375 for increasing the housing mix, 40% of new construction is planned to be for low- to very low-income residents (Appendix L). Providing for the charging needs of these residents will be crucial for ZEV adoption to increase across income levels and have a chance of meeting statewide ZEV adoption goals.

Businesses are another charging site highlighted in most ZEV readiness plans as central to encouraging ZEV adoption. According to the San Diego Regional PEV Readiness Plan, “it is vital to place EVSE at locations in which BEV drivers will stay for long periods: workplaces and other public places such as schools, retail centers, gyms and medical locations” (Appendix U.12). Charging at businesses can decrease “range anxiety” for BEV owners who have long commutes, need to perform extra errands or non-commute trips. The Center for Sustainable Energy offers a fact sheet for businesses considering installing charging stations for employees and a fact sheet for public agencies involved in permitting and building codes.

A fourth target location for electric vehicle chargers is along high-traffic transit corridors. The San Diego Regional PEV Readiness Plan acknowledges the need for DC fast chargers “throughout countywide highway corridors [to]… suit the long-range driving needs of PEV owners.” San Diego Forward: The Regional Plan indicates that through 2050, new housing will be “concentrated in urban areas adjacent to transit” in accordance with Sustainable Community Strategies and California’s SB 375 (Appendix L), so charging sites along transit corridors will be especially useful. The Regional Plan states that “the San Diego region will add nearly one million people, 330,000 homes, and 500,000 jobs by 2050” (Appendix H) and that “the number of homes located within one half-mile of high frequency public transit services will increase from 35% in 2012 to 62% in 2050” (Appendix C). DC fast chargers could also be used for long-distance travelers requiring a quick recharge, as well as local residents with regular commutes. In fact, a UC Irvine survey found that “a network of 290 strategically located fast chargers throughout California would enable 98% of drivers to adopt BEVs based on average daily vehicle miles traveled” (Appendix U.12). Currently, the region has 60 DC fast chargers. Planners acknowledge that “organizing future housing and jobs around transit is a critical strategy in preparing for such dramatic change.” Therefore, the Regional Plan projects transportation and housing growth “in an iterative process” to maximum overlap (Appendices H & L).

With additional ZEV and EVSE incentives tailored to the San Diego region’s unique needs, the County has a much higher likelihood of spurring voluntary electric vehicle adoption at a level adequate to meet state and federal GHG targets. Vehicle incentives should be tailored according to present demographics and regional growth expectations. They might be designed similarly to those adopted in other California regions, like the Regional Charger Program based on BAAQMD practices. Vehicle incentives should also complement transportation system and demand management strategies, other alternative fuel strategies, and VMT reduction measures. Meeting the 2050 GHG emission reduction scenarios evaluated in the Regional Plan is an acknowledged challenge. Given the success of incentive programs in other regions, San Diego has a valuable opportunity to reduce long-term emissions through its own light-duty ZEV and EVSE incentives.